Charles Worley Wants to Put Me In a Concentration Camp 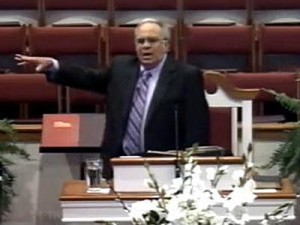 Editor’s note: A Long Island Phi Phi is named for Phi Phi Island in Thailand and is pronounced pea-pea.

Y’all, I was sitting at home enjoying a Long Island Iced Phi Phi and watching Anderson Cooper, as this is one of my sabbatical rituals. I highly recommend grabbing ahold of a Phi Phi while watching Anderson; the two just seem to feel great together for some reason. Maybe that’s just the influence of Thailand.

Anyway, suddenly on AC360, a video was shown of a North Carolina Baptist pastor who preached this:

“Build a great, big, large fence — 150 or 100 mile long — put all the lesbians in there… Do the same thing for the queers and the homosexuals and have that fence electrified so they can’t get out…and you know what, in a few years, they’ll die out…do you know why? They can’t reproduce!”

Now, if anything can ruin my enjoyment of Anderson Cooper, it’s a cold splash of pure human stupidity. But that wasn’t the thing that made me choke on my Phi Phi. It was the separation of terms in the use of the word “queers” from “homosexuals”. The media didn’t really pick up on that fact, and focused on the anti-gayness of the message. But I caught it. You see, Pastor Charles Worley was not using “queer” to refer simply to homosexuals, because he clearly had identified them as a separate group. He was using the word queer as it is sometimes used as a “catch-all” word for anyone without a mainstream sexuality. And let me tell you folks, the activities that go on in my house are anything but mainstream. Just ask Midgie or our good friend Kate.

That’s right. What my good friend Anderson Cooper failed to catch is that North Carolina Pastor Charles Worley had just told a congregation of equally stupid people that I, Dr. Matt, should be put into a concentration camp and left to die.

So, here I was, enjoying the well-deserved time off from doing the sacred work of imparting god-like wisdom to the masses, and someone puts this jackass in front of the pulpit and lets him open his ignorant mouth. If that wasn’t enough, Pastor King-of-the-Bigots decides to ruin my sabbatical by laying out his plan to imprison me along with Neil Patrick Harris, Ellen DeGeneres, and the cast of Glee. Sure, I may not be a gay man, but as soon as Charles Worley found out about all the gadgets and gizmos Midgie gets me involved in, and that one time at that party with her ex that totally doesn’t count as gay, I’m sure he wouldn’t debate the terms. I had no doubt that Pastor Flat-brain wanted to come after me, and for some reason, a man who pretends to speak for an all-loving God promising to throw me into gay camp just really got under my skin, even if I’d get a chance to discuss advice column writing with Dan Savage.

Look, Charles Worley, I understand that North Carolina is under a lot of scrutiny these days. You passed that anti-gay bill and then had the embarrassing result of having it denounced by a U.S. President that, let’s be honest, Jesus would have probably liked the most, and not just because they resemble each other physically. There’s a lot of people in your neck of the woods who suddenly have felt held under the microscope, with such intense scrutiny that they have been forced to ask themselves: “Can I continue to hold these beliefs and somehow continue to consider myself a good person?”

It’s quite a question, I know. It’s one of those questions that could keep you up at night, then could make you restless and want to pace back and forth in front of a crowd of people. Obviously, the answer is “no”, but the real question you should ask yourselves is this: Am I so unwilling to face the truth about myself, that I would imprison most of the cast of Dancing With The Stars and even more importantly, Dr. Matt, who is definitely not gay but certainly gay-adjacent?

Next time, think about these questions, Pastor Dickhead, before you get yourself on T.V. Because if there’s one thing that’s going to unravel my sabbatical and get me back in front of my own crowd of people, it’s an idiot like you. And I’m not someone who likes to get unraveled, at least not without Midgie or Kate saying the safe word.