Don’t Pick on the Pope 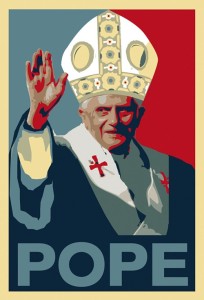 Folks, because of the recent sexual abuse scandals in the Catholic church, the Pope has been in the news a lot lately.  Many have asked questions like: “Does the Pope hold responsibility for the actions of these priests?  Is the sin of omission tantamount to a sin of commission?  Is the fact that the Vatican was granted a status as a sovereign state by the man who created fascism problematic?  Does the installment of a figurehead which has been granted moral authority, a top placement in a spiritual hierarchy, and immunity from prosecution as the head of a sovereign state troubling to anyone?”

Now, while the answer to those questions is “yes,” picking on the Pope is far too easy.  He’s sitting in an office that has been historically designed to abuse power, so what is he going to do?  He doesn’t get to wear Lululemon athletic apparel when making his rounds of dogmatic oppression, so he’s stuck in the same goopy system as everyone else, only in fancier clothes.  So, no picking on the Pope today.  As far as I’m concerned, he has nearly as much moral and spiritual authority as I do, so he can speak his mind.

What does concern me is the fate of people in those churches, who have invested their spiritual path with the notion that the guy in the fancy robes up front is less flawed than they, and as a result, has a greater access to their spirit and to God.  Folks, the idea that anyone on this planet has a better idea of what your path truly should be, is a quick ticket to damnation.  Parents with this stupid notion have left their children with men forced to repress their sexuality, long after those children have been taught this same flawed idea, that the individual they are meeting has a greater voice of authority and power than they have access to themselves.

Midgie once said in a sermon in a church: “If we stopped believing the premise that we are evil, then we would no longer need to have someone save us.”

Now, Midgie’s a little bolder than I am, and she raised a few eyebrows with that one.  I’m sure some of you might even be saying, “Dr. Matt, it sounds like you’re undermining the whole basis for Christianity, and I don’t like it.”  No no, I would be the last to attack anyone’s religion, simply because I have better things to do first.  I just think that it’s clear that people are saying that the Pope holds responsibility for participating in a system that protects priests while endangering children.  And I’m just pointing out that this system comes from the idea that one of those human beings has more authority, and a greater holy mission than the other.  If we hold the Pope and church accountable, and wish to challenge the idea, then it would stand to reason that we have to make sure that we are not participating in such an idea ourselves.  It might be kind of confusing to a child to say that they should trust themselves and they have it within them to choose their own path, and at the same time claim they are evil and they should start looking for some people to tell them what to do.  I’m not saying that you can’t tell them such things.  I’m only pointing out the obvious: that this idea is what has endangered many children around the world.

So, don’t pick on the Pope.  Or the priests or the church.  They’ve only been acting with the authority you’ve given them, with the premise that you’ve supplied.  Sure, prosecute the ones who’ve done wrong.  But if you think of yourself as evil, and needing anyone to step in for you, then stop waving your god-damned finger around.