Exposing a Whirlwind of Stupidity 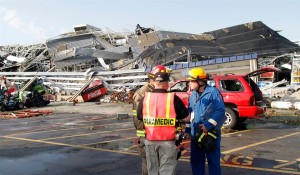 I don’t know if you know this, but a crisis can often tell you everything you need to know about a person.  Nothing will separate heroes from idiots faster.  There are plenty of examples in the world to illustrate this, but one that caught my eye recently came from Sanford, North Carolina.

Sanford was recently hit by a doozy of a tornado, an event that always produces a pile of stories, some heart-warming, and some heart-breaking.  However, one story in particular stood out for me, as told by MSNBC.com, which was about the moment the tornado struck a Lowe’s Home Improvement store with about 100 people inside.

You see, it was almost just a story about people doing the right thing.  A tornado was approaching the store.  Once it was spotted, the employees moved everyone to a secure area, and as a result, when the tornado hit, everyone  survived.  In fact, if that had been the whole story, it might not have been a story at all.

But, you see, folks, at a critical moment in this crisis, when employees began herding customers to safety, a man stepped forward and said, “That’s not a tornado; you don’t know what you’re talking about.”  It is This Jackass that I’d like to talk about.

When This Jackass spoke, some of the people around him began to listen and move back to the front of the store.  If they had continued there, they likely would have been killed.  Fortunately, the employees stood their ground and said, “Let’s not be stupid.”

Now, I’m sure you’ve heard me say the words “Let’s not be stupid” dozens of times, but my guess is that you still think that stupidity is something that is, at most, simply annoying.  If “annoying” is the highest level of danger you can attribute to stupidity, then sorry, folks, but there’s still plenty of stupid that you might want to get out of your system.

“C’mon, Dr. Matt,” you might say, “It’s rare to be in a life-and-death situation like that.”  Sure it is, if you’re talking about a situation exactly like that one, but if you are stuck in stupidity, how are you going to know the moment when it might kill you?

I mean, look at This Jackass in the Lowe’s story.  For his whole life, he’d probably been able to get away with being arrogant, to throw his weight around, and to let his stupidity run amok without ever endangering anyone’s lives.  At least, not to any degree that he was aware.  Suddenly, one day, how he was living mattered, and mattered in a big way.  It was no longer a personal failing but a public danger.

Folks, I hope you’re getting the picture here.  Because most of you are mortal, then any of your indulgences can have dire consequences, and there is no indulgence with greater consequence than stupidity.

Some of you are saying: “But, surely, Dr. Matt, international terrorism is a greater indulgence than stupidity.”  Sure, being stupid on purpose is pretty stupid.  I think we can all agree that there aren’t any terrorists that are exceptionally bright.  But endangering lives by accident, especially your own, out of stupidity, still ranks high on the stupidity scale.  Both are indulgences in stupidity, but the accidental kind is the kind that people feel more comfortable in justifying, which makes it pretty dangerous.

Look again at This Jackass.  There’s a good chance that this experience didn’t alter his behavior in any significant way.  After all, no one died.  If he learns that accidental stupidity has no consequence, then he could eventually decide that intentional stupidity is in the same boat.  When it comes to stupidity, no amount of stupidity is insignificant.  The truth is, small actions can have big consequences.

Whew, this topic is exhausting to talk about.  I think I’ve given you enough to chew on for now.  Hmm, speaking of chewing, a piece of that cake that Midgie brought him sounds pretty tasty right now.  I know my doctor said it isn’t that good for me, but I’ll just have a small piece.  After all, it’s not like eating a little cake ever hurt anyone.