In Defense of Brad Pitt 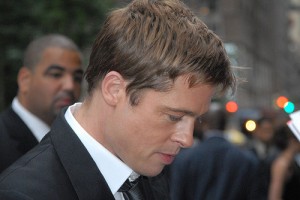 Not long ago, The Hollywood Reporter, which is some kind of online smut magazine, published a story with this headline: “Brad Pitt Uses ‘Moneyball’ Promotional Tour to Criticize Jennifer Aniston“.

About his former marriage to Jennifer Aniston, Brad Pitt had said this: “I started to get sick of myself sitting on a couch, holding a joint, hiding out. It started feeling pathetic. It became very clear to me that I was intent on trying to find a movie about an interesting life, but I wasn’t living an interesting life myself. I think that my marriage had something to do with it. Trying to pretend the marriage was something that it wasn’t.”

Now, you might be thinking that Brad Pitt might benefit from my book, When It Comes To Relationships, You’ve Been An Idiot, so that he would know how to treat someone who’s been a former relationship partner. While that may be true, the person with the relationship problem isn’t Brad Pitt. The problem is the rest of you.

I don’t know if you noticed, but nowhere in that statement did Mr. Pitt criticize Ms. Aniston. He criticized himself and his approach to his marriage. But that didn’t stop the author of this article, a Kimberly Nordyke, from implying that he had betrayed his former wife.  And it didn’t stop the rest of the Internet from jumping on the bandwagon.  In the comments on the article, some of you called Brad Pitt a jerk and a loser, and insulted his current partner Angelina Jolie as being an overbearing, mentally-unstable seductress who collects babies for fun and/or profit.

Guess what, people. When you get mad about the relationship outcome for people that you don’t personally know, then it doesn’t have anything to do with their relationships. If you hate Angelina for what she did to poor Jen, then it doesn’t mean that Angie is a bad person; it means that you’re too chicken to face how you feel about your own relationship experiences. Instead of dealing with how you feel, you’d rather find a stranger with a pretty face and kick the crap out of them instead. If you think that Brad Pitt speaking honestly about his marriage is too much to handle, again, for the inexplicably delicate Jennifer Aniston, then you’d rather undermine the strength of women then give up your pitiful excuse-making out of your own victimhood.

Internet (and that includes you, Kimberly Nordyke), if you think I’m being hard on you, I guess I just don’t have much patience for your sexist, destructive mouth diarrhea that seeks to destroy a current relationship for no good reason other than your own cowardice. When I said that when it comes to relationships, you’d been an idiot, clearly I wasn’t using strong enough language. Because, when it comes to the relationship between yourself and the family of Brad Pitt and Angelina Jolie, you’ve been an shining example of top-notch douchebaggery.

Now, I wouldn’t say that all of the actions of these famous people have been courteous 100% of the time, but as for Brad Pitt, it hasn’t come without healthy self-examination, which is what his quote speaks to. In fact, he followed up with a public statement in support of his former wife, due to the blatant and intentional misinterpretation by the masses. When was the last time that any of you sent a press release praising the virtues of your ex? My guess is never.

If you don’t like what I’m saying, it’s because this is actual criticism. Hopefully, this way you’ll know what criticism looks like and, in the future, you won’t falsely accuse Brad Pitt of it.  (Kimberly Nordyke.)

But I can understand why you might be upset, and why you might have been upset at Brad Pitt in the first place. I think you’re faced with a dilemma. If Angelina and Brad and Jennifer aren’t actually playing out the roles you’ve handed to them, then you’re left with a handful of roles. It’s just you and those roles that you hold. You’re left with the role of a betrayer, a seductress, a jerk, a loser, a victim, and a crazy person who collects babies.

What you don’t understand is that you have a choice.  Sure, you could continue to try to hurl your craptasms at someone else. See if it takes long enough for them to bounce back to you that you feel some reprieve. Or you could let go of them. Someone might call that “forgiveness”, but I call it: “Stop being a dumbass.”

Folks, it’s time to take responsibility for what roles you want to hold, and time to take responsibility for yourself. Because someday, you might be on the receiving end, where someone throws a role at you, and you can say, “You know what? I think that the fact that you called me an idiot has nothing to do with me.” And you’d be absolutely correct.