Protests in Egypt, Libya, and Your Nursing Home 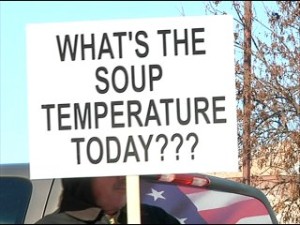 Folks, I’ve been looking at news from around the world, and I’ve been seeing a common theme. That is, a group of people are saying to another group, “We’re mad as hell, and we aren’t going to take it anymore!” The world is awash with protests, and world and local leaders are now having to face the music.

“Well that’s fine, Dr. Matt,” I’m sure you’re saying, “but what’s that got to do with me and the problems in my life?”

What’s It Got To Do With Me?

Well, first, if you haven’t learned how to stop having problems with my popular bathroom reader, helpfully titled Just Stop Having Problems, Stupid!, then we’re already off to a poor start.  At most, two trips to the bathroom with that gem of a book should have put you on the right track.  So let’s assume that you were able to stop a good portion of your problems.

But, perhaps, more problems cropped up for you.  Maybe you weren’t sure how to deal with the problems of someone directly in front of you, that you were in a relationship with.  Again, as you might have guessed, I wrote another book for you, giving you nearly ten times as much wisdom as the first one.  It’s called, When It Comes To Relationships, You’ve Been An Idiot, and from the title, you might guess that the problems you’ve encountered in your relationships may not be with the other person.

Well, now that you’ve tossed the barrels overboard from your boat according to the first book, and erected a statue for yourself from recycled bridge components according to the second book, it’s time to see where you fit into a larger picture.  You see, you’ve been so focused on the problems in front of you, that you assumed were even about you, that you haven’t seen how helping to solve the problems of others can help you solve yours.  You don’t want to take the time out of your busy schedule to do something about the world around you, because there are way too many concerns in your life as it stands.

What you don’t realize is that your concerns are neither unique nor do they belong to you.  What’s been happening around the world is that people just like you have stumbled across the fact that others share their same concerns.  The problems are nearly identical, even though the personalities and lifestyles widely differ.  If you’re still clinging to your problems as your own, that’s okay.  You may be a lot slower on the uptake than people in impoverished and troubled regions.  They get it faster because they pay attention to the world around them, which they have to do in order to survive.

Getting Off Your Ass

A friend of mine said to me recently, “I want to protest, but I don’t know about what.”  They were beginning to realize that their problems were similar, but they didn’t know how to turn it into action.  The reason they couldn’t was because they weren’t yet mad as hell.  They were only angry as purgatory, which kept them in a state of limbo.

What keeps us in that state of limbo is whatever’s left between you letting go of owning your problems, in order to see the commonality between everyone’s.  You don’t have to do it out of the goodness of your heart, although that goodness goes a long way.  You can do it out of pure selfishness, because the more you let go of problem ownership, the more you crowdsource the solving of those problems.  Once you begin participating in the world, you can see that Person A can solve your problem faster, and you can solve Person A’s problem faster.  And Person M, who is me, can solve both problems fastest, but has a limited amount of time.

In any case, pay attention to what’s going on around you.  While you’re sitting there worried about your problems, you may be stopping yourself from actually finding a solution.  Ask yourself often, “What would I do in that other person’s situation, with that problem?”  It’s a way to gain perspective, and to also keep your brain from atrophying when you are old and have old people problems.

And if you’re already old with old people problems, and you think that you’re the only one that hates the cafeteria applesauce, then it’s time to RISE UP (over the course of the next 15 minutes) and say, “I’m mad as hell, and I forgot what else I was going to say!”  (Don’t worry about it, your passion is enough.)

*Dr. Matt is not a real doctor.