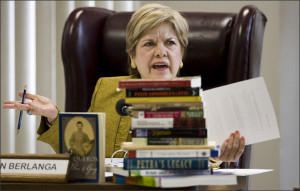 Since I’m a Texas boy, I know you folks have been waiting for me to say something about the Texas state Board of Education voting on controversial new changes to school textbooks.  If you don’t know, the state school board has added language to history books saying that the country’s Founding Fathers were guided by Christian principles and including positive references to the Moral Majority, the National Rifle Association and the GOP’s Contract with America.

According to the folks at MSNBC, they’ve also chosen to downplay “…Thomas Jefferson’s role in world and U.S. history because he advocated the separation of church and state…”

Texas school board member Cynthia Noland Dunbar said about this: “There seems to be a denial that this was a nation founded under God. We had to go back and make some corrections.”

One of the things that strikes me about the constant push from some of these people to put more God into education is that seems to imply an underlying fear that without a constant indoctrination of Christianity, kids in schools would never elect to turn to Christianity by choice. It’s not another religion or another belief system that’s viewed as a threat; it’s a religion-free environment that’s viewed as a threat. The pervasiveness of choice and free will seems to be seen as a major problem by the Texas state Board of Education.

And while the Christians in this group are afraid of the absence of God in education and politics, they seem to fail to recognize the damage the rejection of separation of church and state does to the church. Christianity has become the high-fructose corn syrup of belief systems: it’s in everything and has come to add almost nothing of value. Oh, don’t get me wrong. It’s not anything rotten to the core. After all, a kernel of corn is nutritious and healthy. Similarly, Christianity came from the teachings of a man of great wisdom. But then it was boiled down, the nutrition was taken out until it was nothing but a meaningless additive. It’s cheap to produce and easy to put into something, so why not, they say? Why not put a little more God in that textbook? Or that school? Or that political speech?

Since pointing out that this is oppressive to people of other belief systems is meaningless to these people, I’ll simply point out the obvious. When you expect all of your politicians and schoolteachers–in other words, your social and governmental leaders–to make Christianity-affirming statements, without any further qualification or reasoning of their beliefs, then the religion they supposedly represent means nothing. If you alter textbooks and teachings to prop up a religious belief, then, in doing so, you demonstrate that the belief itself has no inherent value, other than it’s highly insertable into other products. Like I said, high-fructose corn syrup.

In other words, the people destroying Christianity today are, most decidedly, Christians. That wouldn’t be so much of a concern for me if they weren’t destroying everything else while imploding. It would be fine if disgraced priests were publicly stripped of their power after abusing it, except that their abuse of power harmed children. And it would be okay with me if the Texas school board’s abuse of power damaged the very thing they are using as their fuel for abuse of power, except that it, too, is harming children. I don’t want any Texas boys to grow up with a less than quality education just because they happened to live near a Belief System Production Facility. And if they want to follow a religious path, it might be nice if those paths were available by choice.

“Dr. Matt, there’s lots of choices”, you say. Well, there’s lots of choices at a grocery store, but try going to one in the U.S. and buying a beverage without high-fructose corn syrup.  Hey, I’m not saying Coca-Cola shouldn’t exist.  It’s a great invention and is fabulous with rum.  I’m just saying stop putting Coca-Cola into my ginger balsamic salad dressing, because you’re pissing me off.