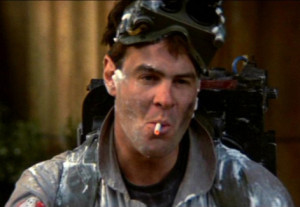 Recently, I spent some time in Belize doing some humanitarian work.  You see, while there are some villages that are geographically isolated and don’t have access to the internet, Belize hasn’t typically been poor enough or problematic enough to attract a celebrity the way that some African countries can.  Therefore, I decided to give these villages the benefit of a celebrity visit.

In the village of Santa Theresa, I met a Mayan snake doctor, or what you might call a witch doctor.  He asked me what I did, and I said that I was also a doctor, but, like him, my doctorate wasn’t granted by any sort of fancy “university”.  My doctorate, of course, is what I call the “doctorate of life”, I told him.  Since we were both doctors, I explained that he should feel free to talk openly about anything that he knew, such as healing deadly snake bites or the ancient tradition of ghostbusting, the latter of course made popular by the Dan Aykyrod film.

The snake doctor, whom I’ll call “Ray Stantz” to protect his identity, said he only shares his knowledge if someone pays him quite a bit of money and spends at least six months working beside him.  It occurred to me, as I’m sure it does to you, that to spread knowledge this way limits franchising opportunities.

“Perhaps you don’t know it, Ray,” I said, “but you’re living in the Information Age, and the best way to reach your audience to teach snake doctoring may be something like an instructional DVD series.”

I hadn’t actually thought about it this way, and Ray had a pretty good point, but I knew he was deflecting a bit from talking about himself.  When I pressed him about it, he readily admitted it and said he had good reason.  “In the old days, some Mayans used to kill for knowledge, or what they thought was knowledge” he said, “or would use the knowledge I have to kill each other.”  In fact, he went on to say that at times they would sacrifice some of their own to try to appeal to the gods for their knowledge.

“I know what you mean,” I said.  “Sometimes I feel like I would kill for some more Google data about my fans.”

He asked me to explain what I meant, and I told him it wasn’t important.  He nodded and said, “What you say about the Information Age is interesting.  Maybe we’re entering a time where we can have all that knowledge that we wanted in the old days, without having to kill for it.”

I rubbed my mustache.  “That would be a different age indeed.  Maybe we would no longer have to sacrifice each other for marketing dominance.”

Ray Stantz smiled at me.  “Maybe we’re entering an age where dominance is not so important,” he said.

I have to tell you, as The Most Famous Fake Doctor Of Our Time, Ray’s words really made me stop and think.  I mean, was there some way to also make him the most famous snake doctor of Belize?  With wisdom like that, he could totally make a killing.  But I guess that’s up to him.