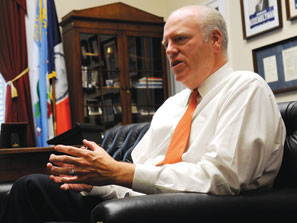 Recently, Michael Schwartz, the chief of staff for Republican senator Tom Coburn of Oklahoma, said at the Values Voter Summit in Washington, D.C., “All pornography is homosexual pornography because all pornography turns your sexual drive inwards.” He continued: “If you tell an 11-year-old boy about that, do you think he’s going to want to go out and get a copy of Playboy? I’m pretty sure he’ll lose interest. That’s the last thing he wants.”

Let me rephrase this stupidity. Apparently, 11-year-olds hate to be gay, so if you can project sexual shame onto them by implying that their own innate sexuality is, in fact, gay, their shame will drive them into whatever behavior you deem appropriate. Folks, I think Michael Schwartz wins the award for stupidest thing Dr. Matt has heard this year, and I’ve heard some doozies.  It is a multi-layered cake of stupidity, a kind of seven-layer Jell-O of stupidity.

Let’s take one layer: pornography.  Now, I know some people are squeamish about pornography, and Mr. Schwartz takes that squeamishness to a whole new level.  Pornography is a sexual interaction caught on film.  Now, if the sex act in itself is not wrong, explain to me how setting up a camera increases its wrongness.  Some people say, “No no no, Dr. Matt, it’s not that.  It’s that it sets up unrealistic expectations of sex or treatment of women.”  Yes, and Michael Bay movies set up unrealistic depictions of heroic men and a male’s ability to create massive explosions.  It’s too easy an answer to say that the medium is suspect because of some of the work produced, and our opinions or shame about pornography reflect, in part, our opinions or shame about sex.  Transformers 2 had a lot of ooos and ahhs, but it had very little substance, and the same is probably true of most pornography.  But films in theatres span the range of a movie like Transformers to a movie like An Inconvenient Truth, so it would be stupid to assume the same range does not exist in other mediums.  Now, granted, I haven’t personally come across a pornographic video that changed my thoughts about global warming, but that doesn’t mean it couldn’t exist.  I will endeavor to do as much research as possible in this area for my fans.

For the next layer of stupid cake, let’s look at this idea that inward sexuality is wrong.  Folks, ALL sexuality should be inward first.  If you are only looking externally to find your sexuality, or if you are making your lover entirely responsible for turning you on, then you have completely dropped the balls.  Your sexuality is your responsibility, and anyone who says otherwise is unsatisfiable.

The thickest layer of Michael Schwartz’s stupid cake is projecting the fear of homosexuality onto children.  And perhaps, even, projecting the fear of homosexuality onto adults.  Now, if I know anything about projection, and I do, often times we project what we fear in ourselves.  So, say, theoretically, you’ve got a guy who is totally unwilling to look inward, and avoids even an external expression that would turn that gaze inward and find homosexuality, well…

You’re right, you’re right, it’s entirely possible that Michael Schwartz is not gay, and maybe someday we will find out the truth that he was hiding his heterosexuality all along.  I applaud Mr. Schwartz for traveling on this journey, and can recommend some films that present explicit examples of heterosexuality to assist him.