The River of Confidence (and the Dam of Stupidity) 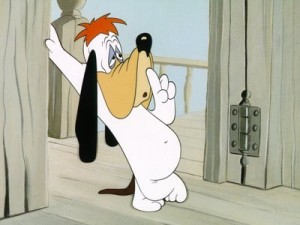 Folks, the other day a guy came into my apartment/office.  I’ll call him Ed, or better yet, a fake name like Freddle.  I better add a last name so that would be something like McMannohaggonbaum.  And if you wanted to pry and we needed a middle name, we could just use Dolly-Parton.  So, just so we don’t get lost, the other day I was paid a visit by Freddle Dolly-Parton McMannohaggonbaum.

Anyway, Fred said to me, “Dr. Matt, how do I become a more confident person?”

I thought to myself, “Well, maybe you could stop being such a pathetic loser,” but I didn’t want to sound too harsh, so instead I said to Fred, “Do you think that perhaps you’re being too much of a pathetic loser?”  (As you can see, by putting it in the form of a question, I greatly reduced the harshness.)

Fred looked a little stunned, and I figured my directness surprised him.  I continued: “Look, Fred, no one expects you to stop being a pathetic loser overnight.  Confidence is–”

“Excuse me, Dr. Matt,” Fred said, interrupting.  “But I’m not a pathetic loser.”

I explained to Freddle Dolly-Parton McMannohaggonbaum that we often fool ourselves into thinking that we have to build our confidence, like it’s a skill that we have to learn.  Well, no, not exactly.  Confidence is our natural state of being.  Did you hear that, people?  Confidence is where we naturally would be, but then things started to get in the way when we were growing up.  Enough people said, “Oh by the way, you’re a pathetic loser,” that we started to believe them.  Little did we know that those people were already pathetic losers and they should have been punched in the face.

For Fred some of it was more recent.  “How can I feel any different?” he said.  “My ex-wife used to berate me in front of other people.  She seemed to love to emasculate me publically.”

“First of all,” I said, “I’ve met your ex-wife.  Is that someone’s opinion you really want to value?  I mean, when they were handing out crazy-psycho pills at the rave party, I think she stole the whole bowl.”  Fred looked ready to defend her (or rather his pathetic loser mind told him to just then), so I quickly said, “Look, I’m not trying to be mean here, but the things you’ve been told are ridiculous things by even more ridiculous people.  People who have no authority to say such things.  Your ex-wife had no authority to say any of that stuff, and the thing that’s hard for you is to admit that you know that she knew that she had no authority.  In fact, the fact that she knew she had no real control over you terrified her, and made her want to do it even more.  She was terrified that any minute you would discover what a pathetic loser she was, at least in her own mind.”

Fred seemed to get it, but after a moment, shook his head.  “Even if I accept that,” he said, “the damage is still done.  I still feel like a pathetic loser.”

I was starting to understand why this guy was such a tantalizing target to his ex-wife.  I mean, when someone is willing to emasculate themselves, it’s not a lot of effort to join in.  I’m reminded of the movie Fight Club.  The main character started “Fight Club” by beating himself up, and that’s when everyone else got interested in fighting him and beating him up.  I wish I could say more but you do not talk about Fight Club.

“Look, Fred,” I said.  “I’m gonna level with you here.  You have a heap of work to do, but you’re not going to get any of it done if you start from telling yourself that it’s work that never should have been piled on you.  Yeah, you’re right.  Good for you.  You recognize that you never should have had to deal with this work.  You’re absolutely right that it wasn’t your fault, and should not have been your burden.  But that doesn’t change the fact that the work still exists, and it’s still your burden whether you deserved it or not.  So if you want to start feeling like a man, start with being willing to do the work at hand.  Stop pointing at the construction site and wondering aloud whose fault it is that the concrete is not poured yet.  Who cares?  You’re the foreman; get someone to pour the gosh darn concrete.”

I was on a roll at this point, and really enjoying the sound of my own voice, so I continued.

“Confidence, as I said, Fred, is a natural state of being.  You don’t need to build it, you need to remove the barriers to it.  Bulldoze all that crap.  Heck, use some dynamite if you have to and pulverize it into nothingness.  Confidence is there like a stuck river, dammed up with the rocks of stupidity.  Blow those rocks up with the dynamite of positivity and action.”  (I believe I got this from Confucious.)

Fred took a deep breath, and had a little bit of that fire in his eye, because if there’s anything a man likes doing, it’s blowing stuff up.  He thanked me, and, even better, paid me, and left.

I believe we can all learn a lot from Freddle Dolly-Parton McMannohaggonbaum, and not just how to spell his name.